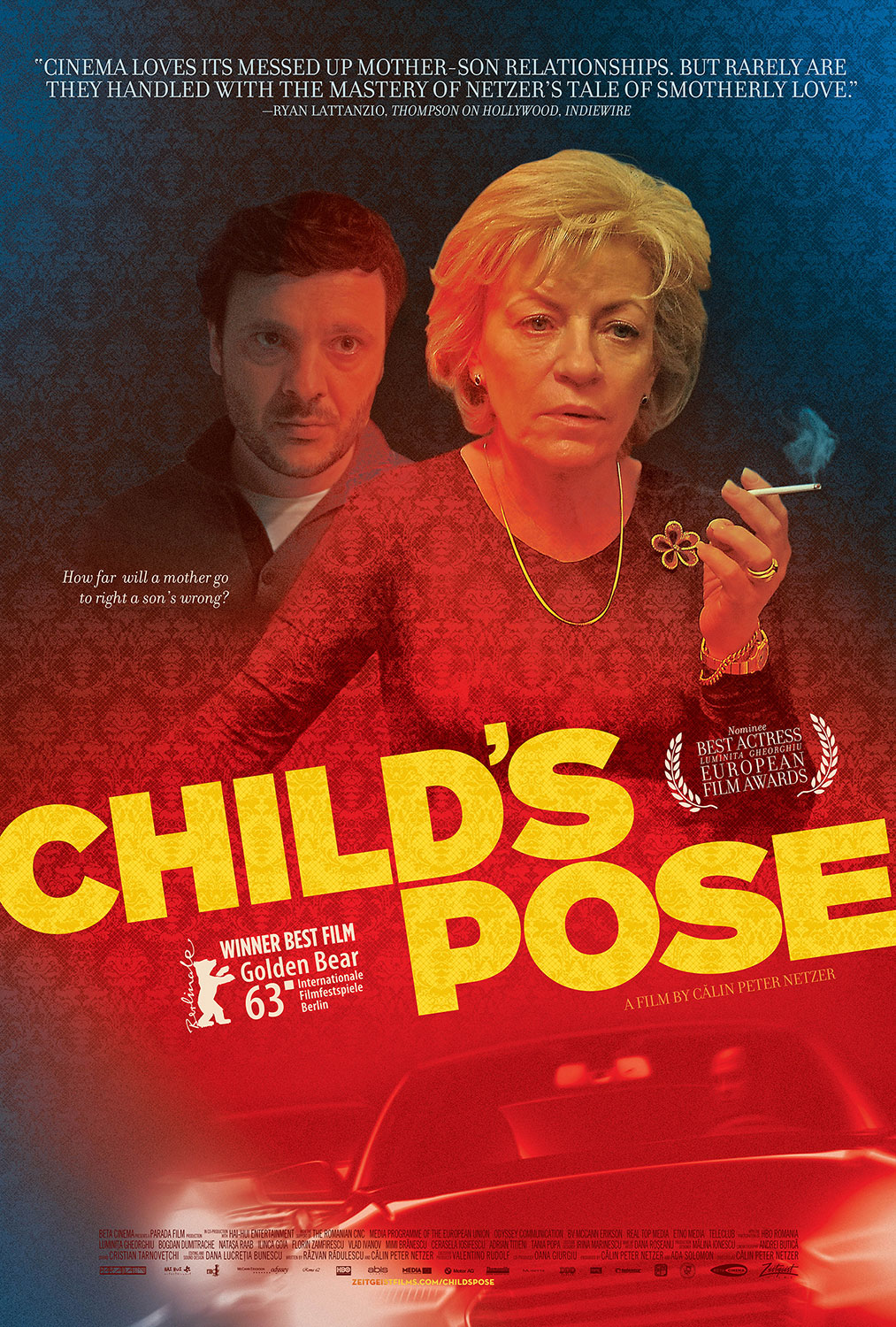 “STUNNING! A FEROCIOUS PSYCHOLOGICAL DRAMA WITH THE PACE OF A THRILLER... You’ll be at the edge of your seat and you’ll feel yourself really moved... As good a foreign language film as you will likely see all year!”
–Kenneth Turan, THE LOS ANGELES TIMES

The top prize winner at the Berlin Film Festival, Calin Peter Netzer’s sharply crafted Child’s Pose pivots on a riveting performance by Luminita Gheorghiu (Best Supporting Actress,The Death of Mr. Lazarescu, Los Angeles Film Critics) as a steely, well-to-do Bucharest architect determined to keep her 30-something deadbeat son out of jail after a deadly car crash. How far will she go to convince the police, eyewitnesses and even the victim’s family that her son was not recklessly speeding? A spellbinding drama of social commentary and psychological realism, this caustic look into the corrupt heart of the Eastern European bourgeoisie twists into a brilliantly ambiguous study of obsessive motherly love. Savagely witty and utterly engrossing, Child’s Pose was also the Official Romanian Entry for Best Foreign Language Film at the 86th Academy Awards.

Calin Peter Netzer was born in Romania in 1975 but in 1983 his parents emigrated to Germany, where he grew up. In 1994, he started attending courses at The National Theatre and Film University in Bucharest, Film Direction Department, and in 1999 obtained his diploma as a film director. His short and feature debuts, both entitled Maria (1997 and 2003) won awards at prestigious festivals around the world. His debut feature film was the Locarno International Film Festival highlight of 2003, obtaining the Grand Prize of the Jury and Silver Leopards for the two leading actors; it was also nominated for the EFA Awards. His next feature, Medal of Honour (2009), was selected for screening in more than 30 festivals and awarded the Silver Alexander and four other prizes at the Thessaloniki IFF 2009. It was also shown at the Turin, Miami, Los Angeles, Zagreb and Transylvania IFF and won two Romanian GOPO Awards for Best Leading Actor (Victor Rebengiuc) and Best Script (Tudor Voican). Child’s Pose is Netzer’s third feature film.

“STUNNING! A ferocious psychological drama with the pace of a thriller... You’ll be at the edge of your seat and you’ll feel yourself really moved... As good a foreign language film as you will likely see all year!” – Kenneth Turan, The Los Angeles Times

“4 OUT OF 4 STARS! Director Calin Peter Netzer crafts not only a chilling story of family dysfunction, but also an illuminating look into the corruption and decay of the Romanian bourgeoisie - without ever overplaying his hand. It all appears so effortless, when in fact it's so skillful.” – David Lewis, San Francisco Chronicle

“A NEW ROMANIAN CLASSIC. MESMERIZING. Gheorghiu amazes…with vivid and perfectly judged performances in a half-dozen masterpieces or more, (she) may be the best actress of her…generation.” – Michael Atkinson, The Village Voice

“A gripping psychological thriller built around the luminous and terrifying performance of Luminita Gheorghiu, who is something like the Meryl Streep of Romania.” – Andrew O'Hehir, Salon

“An extremely strong and upsetting film, yet another example of the fascinating things going on in Romania's new wave, with a breathtaking lead performance by Luminita Gheorghiu. ” – Sheila O'Malley, RogerEbert.com

“Starring Luminita Gheorghiu (in a remarkable performance that should end up on many critics' lists of 2014's best)... Taking on social commentary and psychological realism, Child's Pose is another great offering from Romania, and should not be missed.” – Peter Knegt & Eric Kohn, IndieWire [The 6 Indie Films You Must See This February]

“A continually deepening drama about corruption, class divisions and generational conflict in Romania... stunning effectiveness of the actors... a film that gets all the way down to the rotten bones.” – Stuart Klawans, The Nation

“Wonderfully acted and lit like a daytime nightmare – high resolution with hallucinatory edges from Lazarescu cameraman Andrei Butica – the film moves to a powerful climax. That the film won this year’s Berlin Golden Bear surprised none.” – Nigel Andrews, The Financial Times

“Part exposé of an endemic form of corruption, part examination of the dysfunctional relationship between a strong-willed mother and her estranged son, Child's Pose demonstrates once again that you don't have to raise the volume level to stir the soul.” – Dan Persons, The Huffington Post

“Crafted with such meticulous attention to detail that viewers might mistake it for nonfiction.... Gheorghiu continues to affirm her reputation as a titan of Eastern European cinema.” – Clio McConnell, Washington Square News

“Luminita Gheorghiu puts in a tour de force performance as this strong-willed mother who is determined to win back her son no matter what it takes.” – Fred Brussat, Spirituality & Practice

“One of the wonderful things about the film is that, unlike so many fine Romanian films of late, this one doesn't go exactly where you expect it to...you won't be able to turn away!” – James van Maanen, Trust Movies

“From Psycho to The Deep End, cinema loves its messed up mother-son relationships. But rarely are they handled with the mastery of Calin Peter Netzer's tale of smotherly love.... The film works as high art drama and unnerving white knuckler all at once.... A brilliantly written, guileless exploration of a mother's grotesque affection for her son. While the film deals in unmentionables, it articulates them with a brutal, arresting urgency.... It's about time the Academy tunes into this spate of amazing films coming out of Romania.” – Ryan Lattanzio, Thompson on Hollywood, Indiewire

“The story’s premise is a noir standard.... But as things develop, the story goes beyond the thriller genre into deeper waters: the suspense narrative leads to a spiritual crisis. Challenging, intelligent work.” – Peter Bradshaw, The Guardian (UK)

“In her fur coat and with a cigarette in her hand, Cornelia (brilliantly played by Luminita Gheorghiu) has a touch of Cruella de Vil about her. She is ready to bribe, charm and beg to get her son off. Razvan Radulescu’s screenplay is rich in irony and reversals, highlighting tensions between generations, and between the wealthy elite and the people whose lives are blighted by the elite’s unthinking behaviour and desperation to cling to its status.” – Geoffrey Macnab, The Independent (UK)

“It's one of those rare films (Iranian Oscar-winner A Separation was another) which trusts audiences to bring along their own moral compass. Sharp, chilling and involving.” – Nick Roddick, London Evening Standard

“Gheorghiu, a truly great actress, is here playing the part of a woman who is herself a great actress, and we can't catch either out... The last quarter of Child's Pose is so remarkably strong...” – Jessica Kiang, IndieWire

“Consider this a must see... among the better items in the plethora of solid foreign film offerings running for Best Foreign Picture this year. ” – Eric Lavallée, ioncinema

“Child’s Pose is simply unforgettable cinema – complete with a breathtaking lead performance by Gheorghiu, playing a strong, female lead role in her 60s, something we simply don’t see enough of in Hollywood.” – Stefan Pape, HeyUGuys

“ONE OF THE TEN BEST FILMS OF 2014! Another astonishment from the Romanian renaissance, directed by Calin Peter Netzer, it features a world-class performance from Luminita Gheorghiu as a mother obsessed with redeeming the son who disdains her.” – Peter Rainer, The Christian Science Monitor 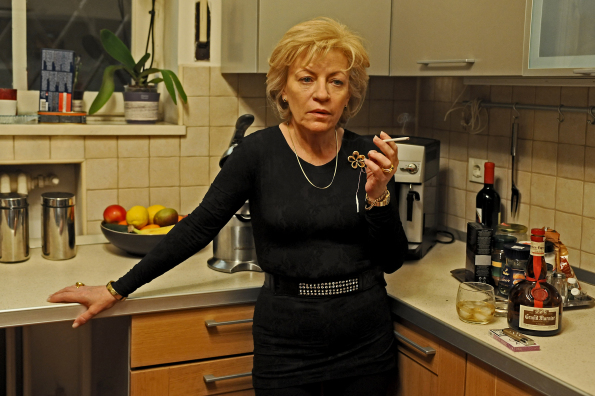 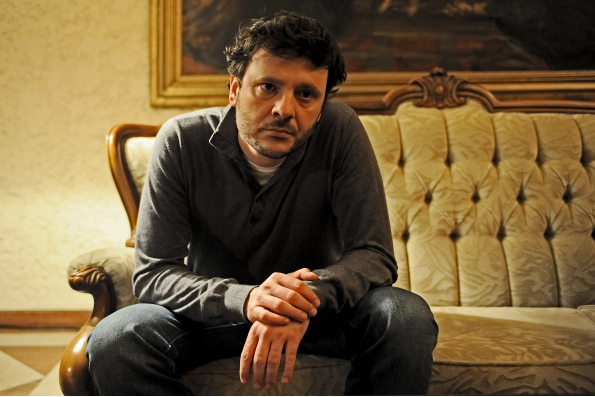 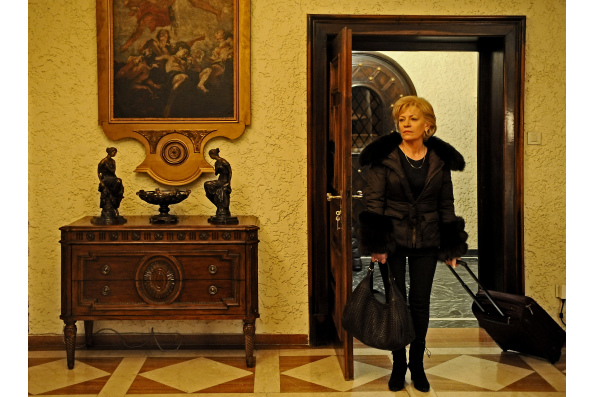 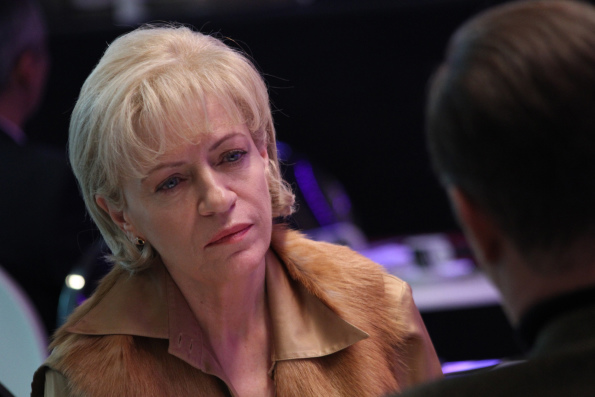 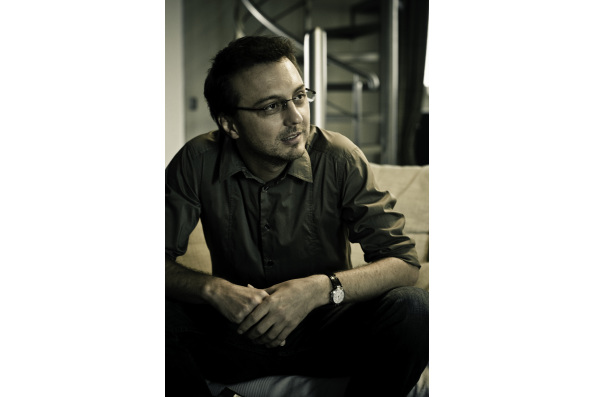