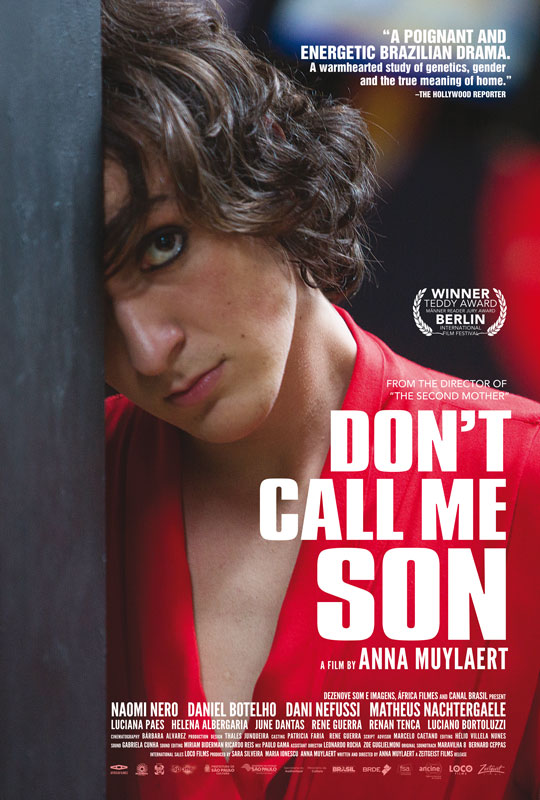 Tall, dark, androgynously handsome, Pierre wears eyeliner and a black lace g-string, while having sex with both boys and girls. The confusion only goes deeper when the teenager’s single, working-class mom is arrested for having stolen him (and his “sister”) at birth. Thanks to the wonders of DNA, he’s returned to his biological parents: bourgeois, straight-laced and thrilled to have him back -- at least until he shows up in a zebra-print mini dress. The turmoil of adolescence is plumbed with wit and compassion by writer/director Anna Muylaert, whose earlier film, THE SECOND MOTHER, also dealt with familial loyalty and class tensions. Actress Dani Nefussi gives completely believable knock-out performances in the role of both mothers, and newcomer Naomi Nero defies expectations as a broodingly intense, potentially volcanic six-footer in stiletto heels. –Karen Cooper, Director, Film Forum

Now on DVD from Kino Lorber. 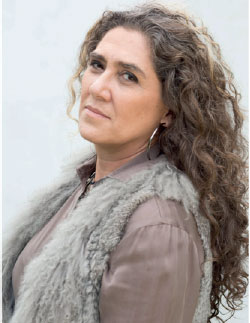 Director, scriptwriter, Anna Muylaert was born in São Paulo, in 1964. She studied cinema at ECA/ USP and directed many shorts, among them the awarded The origin of babies (best film São Paulo film festival). She directed the feature films: Durval Discos, 2002 (Best Film, Jury, Critics and Audience at Festival de Gramado 2002) É Proibido Fumar 2008 (Best Film Jury and Critics at Festival de Brasilia 2009) and Collect Call, 2013. She was a cinema reviewer at Estadão and Isto É. Anna was in the creation team of the child TV series Mundo da Lua and the huge success Castelo Ratimbum, at TV Cultura. She also collaborated on the scripts of the features O Ano em que Meus Pais saíram de Férias and Xingu, by Cao Hamburger, Praia do Futuro, by Karim Ainouz and the TV series Filhos do Carnaval, Alice and Preamar, at HBO. In 2013 she directed the teleplay Alem de tudo me deixou mudo o violão and was the director the TV series As Canalhas by GNT. In 2015 she released a new feature, Que horas ela volta? / (The Second Mother) which won the Special Jury Award for Acting at Sundance film Festival. The film also won the Audience Award for Best Film, in Panorama Section, Berlinale 2015 and was sold to over 30 countries.

“CRITICS' PICK! A fascinating, sympathetic portrait of a lost boy abruptly thrown to the wolves. A scathing critique of upper-middle-class complacency and materialism. A critique of identity on several levels: biological, sexual, social, cultural and class-related. DON’T CALL ME SON is subversive.” – Stephen Holden, The New York Times

“Both unsettling and refreshing. Startling and touching. The subversiveness of Jean Renoir’s BOUDU SAVED FROM DROWNING rubs up against the normality of John Waters’s PINK FLAMINGOS. (The film is) altogether queer and trans and humanist.” – Armond White, OUT Magazine

“Nero...uses his body’s language to communicate the internal conflicts in a marvelous, haunting performance that culminates in powerful confrontation. Nefussi is remarkable in the double role of Aracy and Gloria. A powerful and provocative drama.” – Gary M. Kramer, Gay City News

“A poignant and energetic Brazilian drama that turns a potentially bleak subject into a warmhearted study of genetics, gender and the true meaning of home.” – Jordan Mintzer, The Hollywood Reporter

“It’s [Muylaert's] refusal to preach to her audience that makes the film resonate, and it’s her insistence on treating each character equally which makes Don’t Call Me Son so essentially human.” – Andy Crump, Paste Magazine

“A humane portrait of teenage angst… as attuned to class as it is to gender and sexuality.” – Michael Betancourt, Film Comment

“Beautifully acted and superbly written, Don't Call Me Son is a little gem of a film that needs to be seen widely.” – Dustin Chang, Screen Anarchy

“Powerful and poignant... A sensitive and honest exploration of just what family means” – Mark Rifkin, This Week in New York

“Muylaert handles the story with a great deal of sensitivity. Namoi Nero, a total newbie, in the role of Pierre/Felipe, really pays off quite brilliantly. Both mothers (are) played by a remarkably talented Nefussi” – Roger Walker-Dack, Edge Media Network

“One hell of an awkward family situation. Funny… and always crackling with electricity, in large part due to the lead performance from a magnetic Naomi Nero.” – Rebecca Pahle, Film Journal International 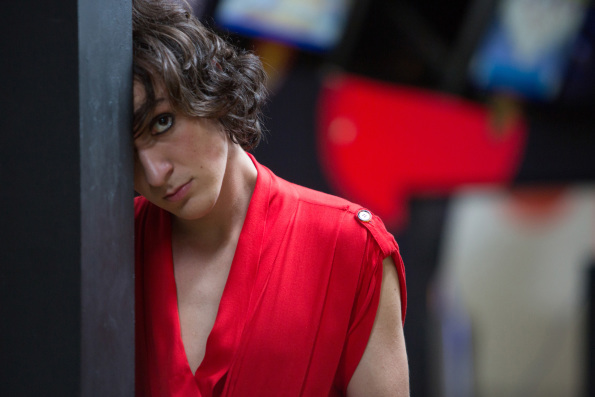 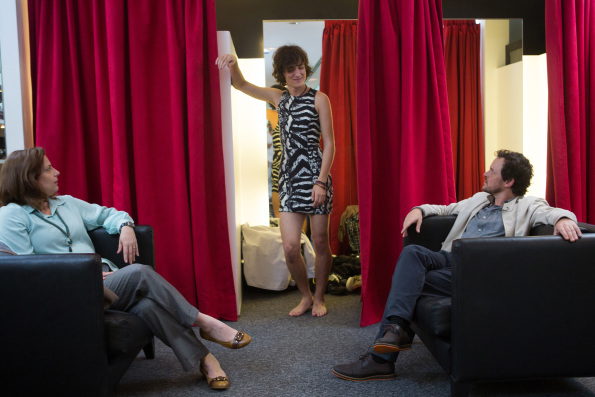 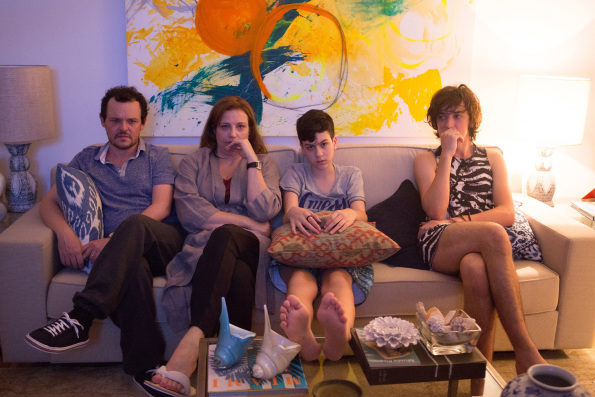 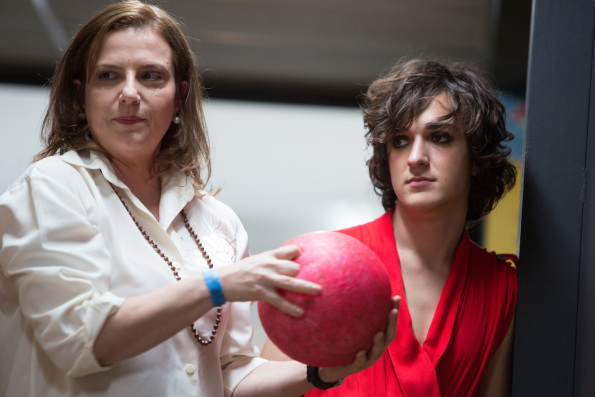 From l. to r.: Dani Nefusi and Naomi Nero in DON’T CALL ME SON, a film by Anna Muylaert. A Zeitgeist Films release. Photo: Aline Arruda. 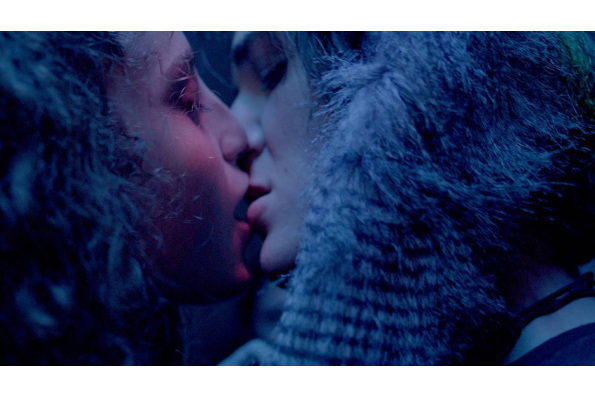 From l. to r.: Marina Zaparoli and Naomi Nero in DON’T CALL ME SON, a film by Anna Muylaert. A Zeitgeist Films release. Photo: Aline Arruda