Private Practices: The Story of a Sex Surrogate 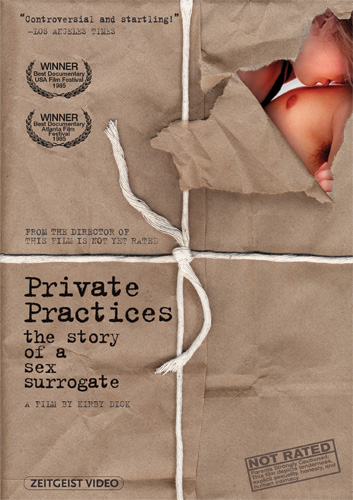 Buy DVD Itunes Amazon Instant Educational Orders Open Showings
In this groundbreaking cult documentary from 1985, director Kirby Dick (This Film Is Not Yet Rated, Derrida) weaves a fascinating study of the curious role of a sex surrogate in the (then) recently established discipline of sexual therapy. Maureen Sullivan and two of her clients agreed to have the entire progression of their therapy taped, and what emerges is a disarming and compassionate look at the struggles people face in connecting with one another. Twenty-five-year-old Kipper is a virginal grad student who gets nervous just talking to a girl, let alone touching her; and John, at 45, is newly divorced and suffering from the revelation that his ex-wife was silently dissatisfied with their sexual relationship for twenty years.

As Maureen attempts to build up their confidence, she exposes her own doubts in this touching film that eschews a clinical approach to sex.