Vision - from the Life of Hildegard von Bingen 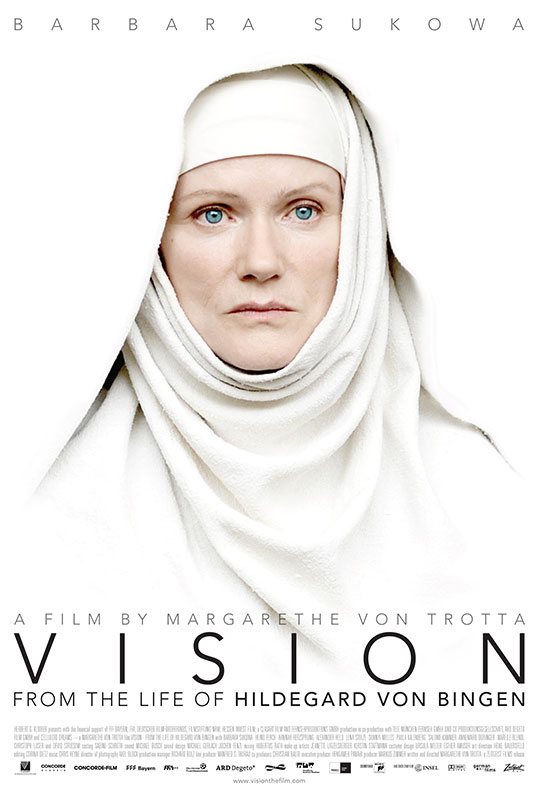 In Vision - from the Life of Hildegard von Bingen, New German Cinema auteur Margarethe von Trotta (Marianne and Juliane, Rosa Luxemburg, Rosenstrasse) reunites with recurrent star Barbara Sukowa (Zentropa, Berlin Alexanderplatz) to bring the story of this extraordinary woman to life. In a staggering performance, Sukowa portrays von Bingen’s fierce determination to expand the responsibilities of women within the order, even as she fends off outrage from some in the Church over the visions she claims to receive from God. Lushly shot in the original medieval cloisters of the fairytale-like German countryside,Vision is a profoundly inspirational portrait of a woman who has emerged from the shadows of history as a forward-thinking and iconoclastic pioneer of faith, change and enlightenment.

Born in Berlin, Margarethe von Trotta is one of the leaders of the New German Cinema movement, as well as one of the world’s most important feminist filmmakers. From the early 1960s, after returning to Germany from Paris (where she encountered the Nouvelle Vague and the films of Ingmar Bergman), von Trotta then pursued acting. As an actress she worked closely with both Rainer Werner Fassbinder (notably inGods of the Plague) and her husband Volker Schlöndorff (in A Free Woman and Coup de Grace). Her directorial debut, The Lost Honor of Katharina Blum, which she co-directed with Schlöndorff in 1975, tells the story of a young woman who has a casual affair with a man she later discovers to be a terrorist. In 1977, she wrote and directed her first solo feature, The Second Awakening of Christa Klages, which introduced many of the themes that she would return to in her later films: female bonding, sisterhood, and the uses and effects of violence. Based on a true story, Christa Klages tells the story of a young woman who resorts to bank robbery in order to keep her kindergarten open.

Starting in 1979, von Trotta began a cinematic trilogy that cemented her reputation as one of the leading directors of the German new wave. Sisters, or the Balance of Happiness, describes the life of two sisters deeply joined, both emotionally and intellectually, in a symbiotic relationship that weighs heavily on them, even after one of them commits suicide. In 1981 she followed this up with Marianne and Juliane (winner of the Golden Lion at the Venice Film Festival). The film portrays two sisters - one a reporter, the other a terrorist - during the social and political upheaval of 1968 Germany. This was followed in 1986 by Rosa Luxemburg, an epic portrait of one of the leading figures of European socialism. Portrayed with stunning grace by Barbara Sukowa (who also gave an award-winning performance in Marianne and Julianne), the character is based primarily on Luxemburg’s letters and diaries, and strikes a balance between the deeply personal and the exactingly political. Her more recent films include Love and Fear (1988), The African Woman (1990), The Promise (1995), Rosenstrasse (2003) and Vision – From the Life of Hildegard von Bingen (2010).

Von Trotta’s son with first husband Jurgen Moeller, Felix Moeller, is a respected filmmaker in his own right and a partner with her in Blueprint Media, their Munich-based production company. In 2010, Zeitgeist Films released his acclaimed documentary Harlan: In the Shadow of Jew Süss.

Despite being seen as a leading feminist director, Margarethe von Trotta herself rejects the description of her films as the product of “women’s filmmaking,” arguing that it confines one to a ghetto of sorts. She believes that she should instead be seen as a filmmaker who is at once a woman, as well as a director who examines the interior of the feminine personal as well as the exterior of the political. She is also a Professor of Film at the European Graduate School in Saas-Fee, Switzerland, and remains an important personality of German cinema.

A German and French Co-Production by Clasart Filmproduktion, Munich with Celluloid Dreams, Paris
as well as ARD/ Degeto Film GmbH.
With the Support of
The German Film Fund (DFFF), The NRW Film Foundation,
The Bavaria Film and Television Fund (FFF), Hessen Invest
and The German Federal Film Board (FFA)

“A memorable, beautiful film! ...The look of the film is extraordinary. Shot in widescreen format, but set almost exclusively inside the two monasteries where the story unfolds, the film possesses a natural visual tension created by its intimacy and broad scope. The compositions of cinematographer Axel Block suggest Jan van Eyck, his lighting Vermeer.” – John Anderson, America magazine

“In VISION, von Trotta achieves a non-preachy coolness that suggests wisdom. Her politics are clear, but they submerge in fascination for von Bingen’s rule-breaking, pioneering faithfulness.” – Armond White, The New York Press

“Barbara Sukowa, the radiant actress who portrays Hildegard as a mixture of canny politician and fervent mystic who claims to receive messages directly from God, makes Hildegard a likeable and charismatic woman who risks a great deal to do good in an environment that leaves women little room for self-expression. Her intelligence and enthusiasm make her a proto-feminist force to be reckoned with.” – Stephen Holden, The New York Times

“CRITICS’ PICK! Dares to portray the spiritual life as something worth aspiring to, even as it makes a case for the revolutionary achievements of its remarkable subject.” – , New York Magazine

“As depicted in VISION, Hildegard was creative, passionate, fierce, dogged, manipulative, holy, learned, loyal—and obedient to her ideal of faith. She supported education and independence for women at a time when most women had neither. Being female, the story of Hildegard shows, often means fighting for parity against men in charge.” – Lisa Miller, Newsweek

“Fans of medieval multi-hypenate Hildegard von Bingen can at last burst into plainsong: Margarethe von Trotta herself has brought the abbess’s remarkable life and times to the screen. Von Trotta is crafting something more complex and layered than the life of a saint.” – Nicolas Rapold, Film Comment

“The film exalts in the diverse accomplishments of the 12th century Benedictine nun. Sukowa embodies her character’s imposition of will with complete conviction, just as she does Hildegard’s imposing intellect and bottomless devotion.” – Todd McCarthy, Variety

“A great performance at once tender and mystic.... Margarethe von Trotta’s film...seems to be exploring the nuances of love on this earth.” – Daniel Kasman, Mubi

“October is bursting with great movies, but the most mesmerizing might just be VISION, a haunting biodrama based on the life of Hildegard von Bingen, a 12th century nun... The movie is dark, fascinating and a reminder of the deep roots of religious women’s tough and ongoing power struggle. ” – Jennifer Merin, WeNews

“A timeless, powerful film... Takes you into a world seldom seen or heard, with piercing intelligence, and a wonderful central performance by Barbara Sukowa. The audience gets to experience what it means to lose oneself in faith, from a female point of view, struggling against the hierarchy of the church. The sparse sound scape and delicate performances draw you into a world long ago, before the cacophony of modernity, and remind you that there’s still silence in the world to embrace.” – John Turturro, 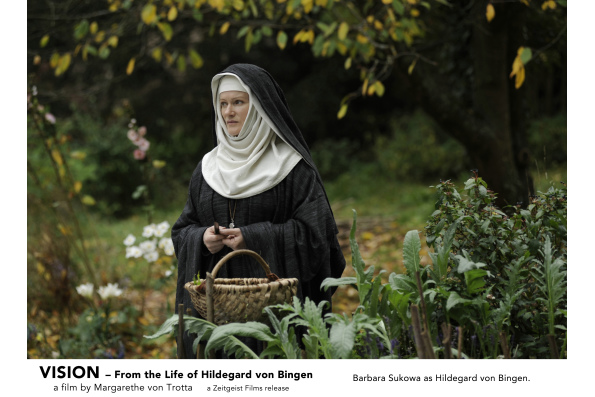 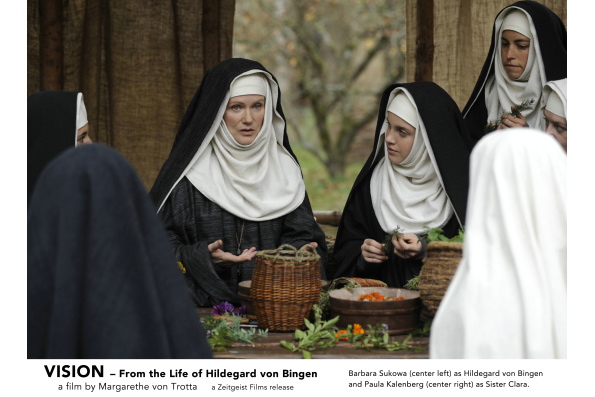 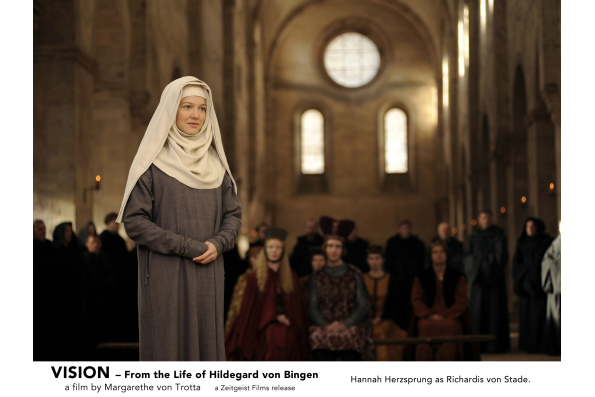 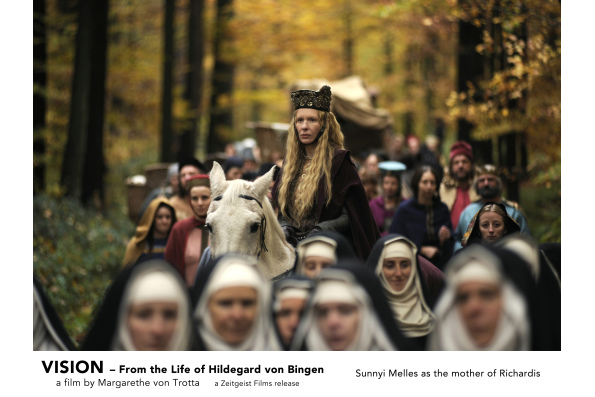 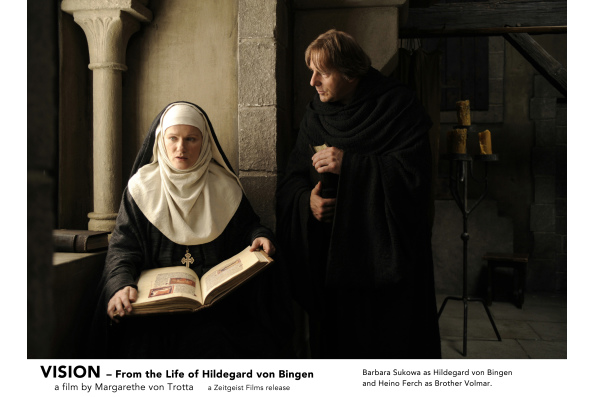 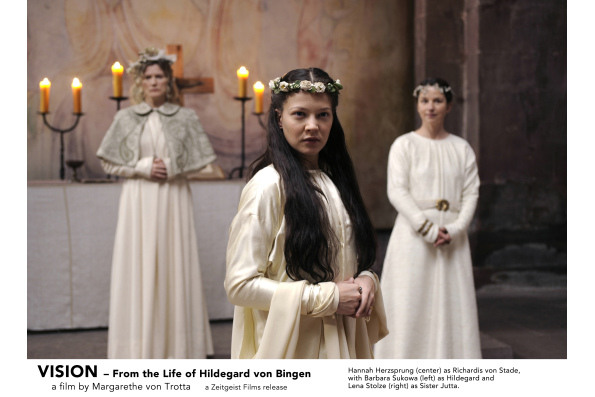 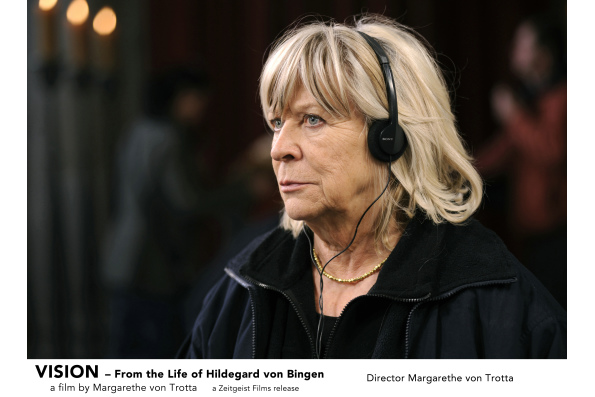 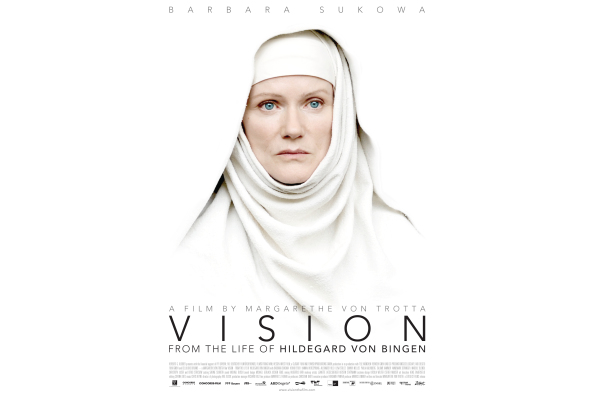